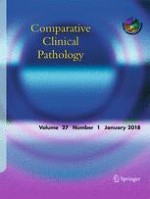 Pulmonary tuberculosis: could tumor markers CA 15-3 and CA 125 be useful for diagnosis and evaluation of response to therapy?

Evaluating the performance of IFAT, RDT, and semi-nested PCR for detection of Leishmania infantum infection on sera samples in symptomatic dogs

Retrospective study on the etiology and clinical signs of canine otitis