The purpose of this study is to determine the effectiveness of endoscopic diode laser therapy in patients presenting rectal bleeding due to chronic radiation proctitis (CRP). A retrospective analysis of CRP patients who underwent diode laser therapy in a single institution between 2010 and 2016 was carried out. The patients were treated by non-contact fibers without sedation in an outpatient setting. Fourteen patients (median age 77, range 73–87 years) diagnosed with CRP who had undergone high-dose radiotherapy for prostatic cancer and who presented with rectal bleeding were included. Six required blood transfusions. Antiplatelet (three patients) and anticoagulant (two patients) therapy was not suspended during the treatments. The patients underwent a median of two sessions; overall, a mean of 1684 J of laser energy per session was used. Bleeding was resolved in 10/14 (71%) patients, and other two patients showed improvement (93%). Only one patient, who did not complete the treatment, required blood transfusions after laser therapy; no complications were noted during or after the procedures. Study findings demonstrated that endoscopic non-contact diode laser treatment is safe and effective in CRP patients, even in those receiving antiplatelet and/or anticoagulant therapy. 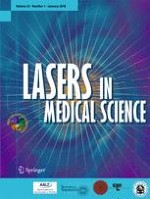 A study on the clinical characteristics of treating nevus of Ota by Q-switched Nd:YAG laser