A total of 250 consecutive patients who underwent an endoscopic endonasal trans-sphenoidal approach were reviewed retrospectively, of which 200 were via the unilateral nostril (group 1) and 50 were via bilateral nostrils (group 2). Surgical and clinical outcomes were analyzed.

For microadenomas, intrasellar macroadenomas and macroadenomas with moderate extrasellar extension, the prevalence of gross total resection (GTR), hormonal outcome and visual improvement were similar between the two groups. The one-nostril group had better results for duration of surgery and blood loss, with fewer rhinological complications. However, for macroadenomas with extensive extrasellar invasion, GTR was obtained in two of seven patients in group 2 but none in group 1.

The one-nostril method, which is relatively fast and minimally invasive, is adequate for endoscopic resection of most pituitary adenomas with moderate extension. 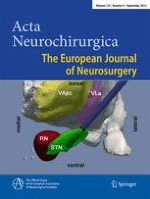 Letter to the editor - Neurosurgical Techniques

Letter to the editor - Vascular

Letter to the editor - History of Neurosurgery

An S-shaped incision for the insertion of deep brain stimulators

Evaluation of two- and three-dimensional visualization for endoscopic endonasal surgery using a novel stereoendoscopic system in a novice: a comparison on a dry laboratory model