The online version of this article (https://​doi.​org/​10.​1007/​s00381-019-04203-2) contains supplementary material, which is available to authorized users.
Prior Publication or Presentation
No portion of this paper has been previously presented or published in any academic or clinical proceedings or journals.

Optimized management of pediatric hydrocephalus remains the subject of debate. Ventriculoperitoneal shunt is largely considered the standard of care. However, the advancements and introduction of new cerebrospinal fluid (CSF) diversion approaches including the use of endoscopic third ventriculostomy (ETV) offer appealing alternatives that have been reported in numerous observational series.

To evaluate the comparative safety and efficacy of shunting and ETV in pediatric hydrocephalus cases.

This systematic literature review was performed according to the PRISMA guidelines. Eligible studies were identified through a search of PubMed (Medline) and Cochrane until October 2018. A random effects model meta-analysis was conducted and the I-square was used to assess heterogeneity. The ROBINS-1 tool and Cochrane tool were used to assess risk of bias in the observational and randomized studies, respectively.

ETV was associated with a statistically significant lower risk of procedure-related infection compared to shunt. All-cause mortality, CSF leak, and re-operation rates were similar between the study groups. Subgroup analysis based on the geographic region showed that ETV is associated with statistically significant lower odds for re-operation in Europe and Africa, but not in USA/Canada. Future RCTs are needed to validate the results of this study and elucidate the cause of this heterogeneity. 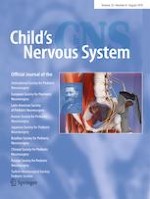 A rare case: sclerosing osteomyelitis of the frontal bone

Treating nasoethmoidal encephalocele in a low-resource country: a surgical experience from a Philippine multidisciplinary craniofacial team

Pathogenesis of hydrocephalus in achondroplastic dwarfs: a review and presentation of a case followed for 22 years