At relatively low concentrations, flavanols induce inconsistent effects on isolated arterial tone, sometimes explained as being due to a structure–activity relationship. The aim of our study was to investigate the effects of two flavanols at different doses on arterial functional state.

The effects of two catechins, (−)-epigallocatechin-3-gallate (EGCG) and (−)-epicatechin (EP), on rat-isolated aorta tone were investigated on resting tension and on precontracted preparations, both in the presence and in the absence of endothelium.

Our findings highlight the important role played by an endothelium/NO-mechanism in the regulation of basal tone and in both mediating vasorelaxation and counteracting vasoconstriction induced by low concentrations of flavanols in rat thoracic aorta. 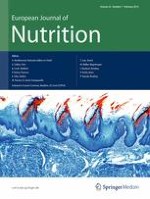 The effect of plant sterols on serum triglyceride concentrations is dependent on baseline concentrations: a pooled analysis of 12 randomised controlled trials