Between January 2003 and December 2014, we retrospectively reviewed the medical records of 52 patients (52 aneurysms) from four institutions who underwent endovascular coiling of M1 segment aneurysms. Patients who underwent clinical and radiologic follow-up for more than a year after the procedure were evaluated.

Endovascular coiling of M1 segment aneurysms appeared to be a feasible treatment option with a relatively low-retreatment rate. Aneurysm size was statistically significantly associated with recurrence. 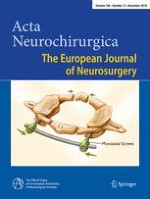 Surgical-site infections following cranial surgery: is it time to reconsider our preventive measures?