Patients with 58 immature AVF underwent PTA treatment in our institute during the past 9 years. Based on pretreatment ultrasound findings, the immature AVFs were categorized as stenosed, thrombosed, and obliterated type. An optimal entry site was punctured under ultrasound guidance followed by conventional fluoroscopy-guided PTA technique. Technical and clinical success as well as complications were recorded. Patency after angioplasty was estimated using Kaplan–Meier analysis. Predictors of patency were estimated using log-rank test. 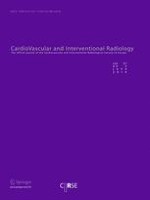 Transjugular Intrahepatic Portosystemic Shunt for the Treatment of Budd–Chiari Syndrome Patients: Results From a Single Center

Letter To the Editor

Duodenal Perforation by an IVC Filter: A Case and Discussion Expanding on the 2010 Guidelines for Filter Retrieval