Endovascular thrombectomy has become the de facto standard in the treatment of large vessel occlusion. Previously, a correlation between good outcome and the occlusion site, measured by the ‘distance to thrombus’ (DT)—as the distance from the carotid T to the beginning of the thrombus—after thrombolysis could be shown. In the present study, we analyze the differences between the chances of a good outcome in respect of DT between patients treated endovascularly or intravenously.

A dual-center database analysis including patients with stroke due to occlusion of the middle cerebral artery (MCA) was performed. Inclusion criteria were a completed treatment and full documentation of the clinical course. DT was measured in pre-treatment images. DT was correlated with the mRS at 90 days stratified according to the different treatment methods.

A total of 280 patients could be included. We were able to show a correlation between the chances of good clinical outcome and the occlusion site measured by DT after i.v. thrombolysis. The outcome after endovascular treatment showed no correlation with DT (p = 0.227). After a DT of 26 mm, the chances of a good outcome after i.v. thrombolysis exceeded those after endovascular treatment. 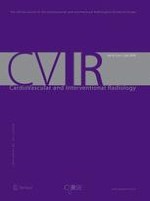 Ultrasound-Guided Percutaneous Radiofrequency for the Treatment of Morton’s Neuroma

The European Board of Interventional Radiology Examination: A Cross-Sectional Web-Based Survey

What is the Best Revascularization Strategy for Acute Occlusive Arterial Mesenteric Ischemia: Systematic Review and Meta-analysis

Use of a Re-entry Device in Left Subclavian Occlusion: Case Series