The pharmacological specificities of the rectal formulation of acetaminophen led to a debate on its appropriateness for managing fever in children, but few data are available on the formulation’s current use and determinants of use. In a national cross-sectional study between 2007 and 2008, healthcare professionals were asked to include five consecutive patients with acute fever. Among the 6255 children (mean age 4.0 years ± 2.8 SD) who received acetaminophen given by parents or prescribed/recommended by healthcare professionals, determinants of suppository use were studied by multilevel models. A suppository was given by 27 % of parents and prescribed/recommended by 19 % of healthcare professionals, by 24 and 16 %, respectively, for children 2 to 5 years old, and by 13 and 8 %, respectively, for those 6 to 12 years old. Among children who received suppositories from parents and healthcare professionals, 83 and 84 %, respectively, did not vomit. Suppository use was independently associated with several patient- and healthcare professional-level characteristics: young age of children, presence of vomiting, or lack of diarrhea.
Conclusion: We report an enduring large use of suppositories in France for the symptomatic management of fever in children, including in non-vomiting and/or older children. The rational for such use should be questioned. 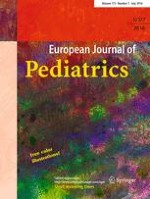 Short- and long-term psychosocial of a single episode of alcoholic intoxication: a cohort study among Dutch adolescents

Impact of healthcare-associated sepsis on mortality in critically ill infants

Screen time is associated with depressive symptomatology among obese adolescents: a HEARTY study