The lifting in 2010 of the HIV entry ban eliminated an access point for HIV testing of the foreign-born. The African Diaspora Health Initiative (ADHI) was developed to examine alternative pathways to testing for African and Caribbean persons. The ADHI consists of Clinics Without Walls (CWW) held in community settings. HIV testing is offered to participants along with hypertension and diabetes screening. A survey is administered to participants. Descriptive data were analyzed using SAS 9.2. Between 2011 and 2015, 4152 African and Caribbean individuals participated in 352 CWW. Participants were mostly (67.7 %) African. HIV rates were lowest in Caribbean women (0.4 %) and highest in Caribbean men (8.4 %). Efforts to engage African and Caribbean communities in HIV testing are important given the elimination of the HIV entry ban and continued immigration to the US from areas of higher prevalence. The ADHI offers a successful model of engagement. 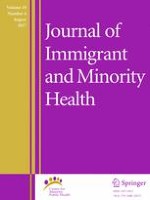 Factors Associated with Hepatitis B Knowledge Among Vietnamese Americans: A Population-Based Survey

Erratum to: Coming of Age on the Margins: Mental Health and Wellbeing Among Latino Immigrant Young Adults Eligible for Deferred Action for Childhood Arrivals (DACA)

A Community Standard: Equivalency of Healthcare in Australian Immigration Detention