Enhanced recovery after surgery (ERAS) protocols have shown significant benefits in terms of patient outcomes and institutional cost savings in colorectal and bariatric surgery. This has not, however, been tried in the neonatal setting. One of the major barriers to developing ERAS protocols in the neonatal intensive care unit (NICU) is the often-prolonged intubation of neonates after surgery. To this end, we evaluated our institutional data to determine if prolonged intubation post-operatively is associated with adverse events.

This is a retrospective cohort study of neonates who were intubated for a surgical procedure from January 2012 to December 2016. Documented data included pre-operative intubation status, timing of post-operative extubation: immediate (< 24 h) or delayed (> 24 h), and adverse respiratory events. The Fisher exact test and Student’s t test were used to study differences amongst categorical and continuous variables, respectively.

58 surgical procedures were identified, where the patient was intubated specifically for the surgical intervention, of which 28 were extubated immediately and 30 were extubated in a delayed fashion. The overall incidence of adverse respiratory events was increased in the delayed extubation group (P = 0.03).

Healthcare providers should encourage early extubation after neonatal surgery. Consideration should be given to implementing ERAS protocols in NICUs. 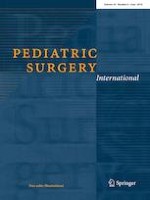 Is renal scintigraphy really a necessity in the routine diagnosis of congenital solitary kidney?

Pediatric vesicolithotomy from ancient India to Greece, Arabia and the western world