Eosinophilic granulomatosis with polyangiitis (EGPA) is characterized by necrotizing vasculitis of small-sized vessels with extravascular granulomas and eosinophilic infiltration. The case of a 48-year-old Japanese woman with EGPA, who presented concurrently with subarachnoid hemorrhage (SAH) and coronary vasculitis, is reported. She initially presented with bronchial asthma, and then 8 months later she developed various symptoms caused by systemic eosinophilic vasculitis and was admitted to our hospital. Three days after admission, she started oral corticosteroid therapy, and her 2009 Five-Factor Score (FFS) was 0. However, she developed an SAH, followed by coronary vasculitis 1 day later. With extensive treatment with a combination of betamethasone, cyclophosphamide, intravenous immunoglobulin, and rituximab, her systemic vasculitis improved dramatically. This seems to be the first case of EGPA with SAH and coronary vasculitis. In previous reports of EGPA with SAH, 4 of 11 cases developed SAH as an exacerbation of systemic vasculitis during remission induction therapy. The present patient also had SAH during remission induction therapy. However, the period between bronchial asthma and SAH was only 8 months. This is the shortest among case reports of EGPA with SAH. In addition, the present patient rapidly developed coronary vasculitis. These findings suggest that EGPA causes SAH and coronary vasculitis as early complications of systemic vasculitis. In EGPA, it is necessary to pay careful attention to rapid changes of disease activity, even when the FFS indicates a good prognosis. 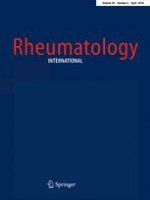 Suicidal behaviors in patients with rheumatic diseases: a narrative review

Variability in the prescription of biological drugs in rheumatoid arthritis in Spain: a multilevel analysis