The prevalence rates of ossification of the posterior longitudinal ligament (OPLL) in the Korean population were reported as 3.4 and 0.6 %. However, these studies were performed before the era of three-dimensional computed tomography (3D CT). We investigated the prevalence of cervical OPLL on the basis of 3D CT and features of OPLL distribution in an adult Korean population. During 2011 and 2012, a total of 3,240 patients were enrolled who had undergone thyroid 3D CT. A total of 1,084 men and 2,156 women were included. Axial and sagittal reconstruction images were used for observations. More than 2 mm thickness in an axial image was the criterion for the presence of OPLL. The prevalence rate was adjusted according to a standardized population according to Statistics Korea. The OPLL prevalence rate was 5.7 %. The standardized prevalence rate was 4.60 %. The standardized prevalence rates in men and women were 6.43 and 3.61 %, respectively. The over-70 age group had the highest OPLL prevalence. Age and prevalence rate were positively correlated in men and women (correlation coefficient 0.991 and 0.991, P < 0.001 and P < 0.0001, respectively). Among OPLL types, the multiple segmental type was most frequent (37.3 %). The most commonly involved level was C5 (4.8 % in men, 2.2 % in women), C4 (4.6 % in men, 1.2 % in women), and C6 (3.7 % in men, 2.4 % in women) segments, in decreasing order. To our knowledge, this study is the first 3D CT–based epidemiologic study on cervical OPLL in a Korean population. 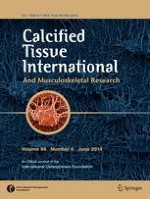 Heritability of Bone Mineral Density in a Multivariate Family-Based Study