Ireland has a low prevalence of chronic hepatitis B virus (HBV) infection; however, there are limited recently published epidemiological data. This study aimed to describe the epidemiology of chronic HBV in Ireland between 2004 and 2014 using routine surveillance data and identify and interrogate additional data sources in Ireland to complement the interpretation of HBV surveillance data.

Between 2004 and 2014, a total of 7463 notifications of HBV were made in Ireland; the majority (91%) were classified as chronic cases. Notifications peaked in 2008 and decreased until 2013. Hospital discharges, new cancer registrations, and deaths from primary liver cancer and hospital discharges from cirrhosis have increased each year.

The epidemiology of HBV in Ireland mirrors immigration patterns. Without a coordinated screening and care programme for priority populations, particularly for immigrants from high prevalence countries, it is likely that hospitalisations and deaths from HBV-attributable cirrhosis and primary liver cancer will continue to rise, with considerable associated public health expense. 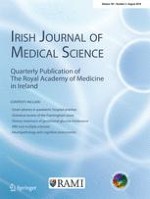 Elective ambulatory surgical care in Ireland—why it needs to be better coded, classified and managed

Emerging trends in hospitalisation for fragility fractures in Ireland