Traditionally, seizure onset localization in ictal electro-encephalography (EEG) is the main factor guiding resective epilepsy surgery. The situation is often different in infantile epileptic encephalopathy. We demonstrate the importance of the underrated interictal (rather than ictal) surface EEG in informing decision-making in epilepsy surgery for children with epileptic encephalopathy caused by subtle focal cortical dysplasia (FCD).

We present a small case series of three children who had an epileptic encephalopathy with either epileptic spasms or tonic seizures. All three were thought initially to have normal neuroimaging.

In infantile epileptic encephalopathy caused by subtle FCD, the often underrated interictal surface EEG (particularly persistent foal irregular slowing) informs the most; not only to the target area for surgical resection but also to its extent. This may negate the need for unnecessary and sometimes non-informative invasive monitoring in these cases. A matter of “zooming out” to define the extent of a resectable abnormality rather than “zooming in” to define a seemingly localized epileptic focus that may change with time. 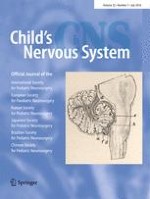 Comment on: “sagittal MRI often overestimates the degree of cerebellar tonsillar ectopia: a potential for misdiagnosis of the Chiari I malformation”, by R. Shane Tubbs et al.