Epistaxis Due to Leech Infestation in Nose: A Report of Six Cases and Review of Literature | springermedizin.de Skip to main content
TOOLBAR 1 2 3 4
SUCHE MENÜ 1 2 3 4

The aim of this study is to report unusual cause of epistaxis due to leech infestation in nose in hilly area and its management. The study was carried out for a period of 4 years (2008–2012) in a secondary level hospital in hilly area of Darjeeling, West Bengal, India with data collected from the OPD and Emergency register of the patients. This retrospective case series consisted of six cases. All the cases presented with unilateral recurrent epistaxis and foreign body nose. Anterior rhinoscopy revealed fleshy greenish brown mobile mass inside the nasal cavity which was removed by forceps. The animate foreign body was identified as leech in all the cases. To conclude, in hilly areas leech infestation can present as animate foreign body in nose and it should be considered as important cause of epistaxis. 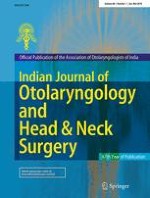 Genetics: A New Frontier in Otology