We aim to establish the following claim: other factors held constant, the relative weights of the epistemic burdens of competing treatment options serve to determine the options that patient surrogates pursue. Simply put, surrogates confront an incentive, ceteris paribus, to pursue treatment options with respect to which their knowledge is most adequate to the requirements of the case. Regardless of what the patient would choose, options that require more knowledge than the surrogate possesses (or is likely to learn) will either be neglected altogether or deeply discounted in the surrogate’s incentive structure. We establish this claim by arguing that the relation between epistemic burdens and incentives in decision-making is a general feature of surrogate decision-making. After establishing the claim, we draw out some of the implications for surrogate decision-making in medicine and offer philosophical and psychological explanations of the phenomenon. 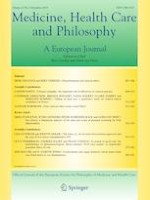 Correction to: Scientific supremacy as an obstacle to establishing and sustaining interdisciplinary dialogue across knowledge paradigms in health and medicine

Kenneth Gergen’s concept of multi-being: an application to the nurse–patient relationship

Clinical sympathy: the important role of affectivity in clinical practice

Just choice: a Danielsian analysis of the aims and scope of prenatal screening for fetal abnormalities