We herein report the case of a 67-year-old man who initially presented with fever and hepatosplenomegaly, and soon died of progressive liver failure. The bone marrow was infiltrated with tumor cells showing a variable morphology and macrophages phagocytosing blood cells. The tumor cells were CD2+, CD3+, CD4−, CD8+, CD25+, CD56+/−, and HLA-DR+ and exhibited clonal cytogenetic abnormalities. Microscopic examination of the liver postmortem revealed, prominent cellular infiltrates that were confined within the portal area. The infiltrated cells were medium-sized with the CD3+, CD4−, CD8+, CD56+/−, and granzyme B+ phenotype. In situ hybridization detected Epstein–Barr virus (EBV)-encoded RNA-positive cells in the liver and spleen as well as the bone marrow obtained before his death. These observations indicate that EBV-associated T-cell lymphoma expressing cytotoxic proteins was the underlying disorder. Prominent portal involvement was most likely responsible for the fatal clinical outcome of this patient. 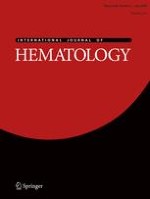 A safety, pharmacokinetic and pharmacodynamic investigation of deferasirox (Exjade®, ICL670) in patients with transfusion-dependent anemias and iron-overload: a Phase I study in Japan