main-content
nach oben
Zurück zum Suchergebnis
​
print
PDF-Version jetzt herunterladen
​
download
Inhaltsverzeichnis
​
insite
Ausgabenarchiv
​
archive
​
insite
Drucken
​
print
» Zur Zusammenfassung PDF-Version jetzt herunterladen
Ernest Amory Codman was born in Boston, Massachusetts, on December 30, 1869, the fourth and last child of William and Elizabeth Codman. (The editor notes this biosketch came largely from the excellent and entertaining biography by William Mallon, Ernest Amory Codman: The End Result of a Life in Medicine [ 4].) The family had long lived in New England, the earliest known Codman having received a grant of land in Salem, Massachusetts in 1637. According to Mallon, “Codman’s upbringing was definitely that of the elite, cultured class – the Brahmins”. Codman entered Harvard College in 1887, graduated cum laude in 1891 and subsequently entered Harvard Medical School. During his time there, he met and became best friends with Harvey Cushing, the famous neurosurgeon. He traveled to Europe and Egypt during his third year, visiting centers in London, Paris, Berlin and Cairo, among others, and studied with Eduard Albert, the Professor in Vienna. While he finished his studies in 1894, he spent his last year as an intern at the Massachusetts General Hospital and graduated in 1895. He subsequently obtained the position of Assistant in Anatomy at MGH and was apprenticed to Francis Harrington, the Chief of the Surgical Services (formal residencies as we know them did not exist in those days) (Fig. 1). One of his earliest interests was the newly discovered (by Conrad Röntgen in 1895) x-rays. He worked with Cushing and others and in 1899 was also appointed as the first “skiagrapher” (radiologist) at Boston Children’s Hospital. He was an early and prolific author, publishing not only in radiology, but also many aspects of general surgery. In 1900 he was appointed Assistant in Clinical Operative Surgery. He was, however, a rather insistent person, and perhaps in part owing to disagreements with colleagues, in 1911 he resigned his full-time post at MGH and opened his own hospital: the Codman Hospital (Fig. 2). He nonetheless maintained a part-time post at MGH until 1914 when he resigned entirely, undoubtedly out of frustration because the hospital refused to accept the “End Result” system, arguably one of Codman’s greatest contributions and one for which Mallon stated he was “maniacally obsessed.” The idea was simple, “The common sense notion that every hospital should follow every patient it treats, long enough to determine whether or not the treatment has been successful, and then to inquire, ‘If not, why not?’ with a view to preventing similar failures in the future” (italics from Codman). While obviously not today a controversial position, it is obvious few hospitals or medical practices in fact follow patients as he advocated, and in Codman’s day the suggestion was particularly inflammatory since he decided the system should be used to judge surgeons and determine promotions (rather than seniority).
×
×
Codman was active nationally and internationally in various professional organizations. He was a founding member of the American Society of Clinical Surgery (later to become the Society of Clinical Surgery) in 1903. This was a decade before the American College of Surgeons was planned in 1912 and formally established at a meeting of the Clinical Congress of Surgeons in North America in Washington, D.C., in 1913. He was intimately involved with early attempts to standardize hospitals. However, perhaps owing to his insistent nature, he often irritated his colleagues. One of them, Dr. Edward Martin, wrote to Codman in 1914:

“Dear Codman:
God bless you! I suppose I should hate you if I lived in the same town, but my feeling, being remote, is quite other. Indeed the very enemies who lurk in second story windows with muffled rifles are waiting your passing, are the ones who take off their hats in deepest respect as your cold, but beautiful, corpse is carried away” [ 4].

Anzeige
Codman published over 100 papers and books. Perhaps in addition to his works on tumors the best known are his contributions to the shoulder. He also has considerable eponymic fame [ 4]: “Codman’s tumor,” “Codman’s triangle,” “Codman’s exercises,” “Codman’s sign,” “Codman’s paradox,” “Codman’s bursa.”
Mallon carefully documented a meeting at the Boston Medical Library in 1915 [ 4]: “But if one single night can effectively ruin a surgeon’s career, it is likely that this happened to Codman on a Boston winter’s eve in 1915.” The issue was hospital efficiency. Codman apparently spoke only briefly at that several hour meeting, but “nobody remembers a word said that day other than those brief few spoken by Codman.” Stories appear in the Boston Post and the Boston Daily Globe: “Cartoon Raises Surgeon’s Ire: Dr. Codman Stirs Up Medical Society” read a headline in response to a controversial cartoon Codman showed of an ostrich burying his head in the sand and with derogatory remarks. The Suffolk Medical Society requested his resignation, and he complied, resigning from the Surgical Section of the Society.
Codman’s idea of the End Result developed between 1902, when he published his first attempt to analyze end results in the literature, and 1910, when he wrote, “From the day in the summer of 1910 on which Dr. Edward Martin of Philadelphia and I drove back to London in a hansom cab from the Tuberculosis Sanitarium at Friml[e]y this End Result Idea has taken the major share of my intellectual efforts.”
Closely related to his idea of an End Result System, Codman developed the first registry. In two papers we republish here [ 1, 2], Codman described a way to follow patients nationally. His registry on bone sarcoma became practical in 1920 with a gift of $1000 from the family of a patient. Subsequently he was sufficiently persuasive as to obtain over $8000 from the American College of Surgeons. He was not altogether as successful in encouraging his colleagues to contribute to the registry. In 1924 he commented, “I want to see the American College of Surgeons as a pack of hounds on Bone Sarcoma, each baying when he finds a case and bringing it to the attention of the pathologists of the country” [ 1]. But, “In three years the Registry has only found five five-year cures of true osteogenic sarcoma by amputation.” By 1926 he had solicited only 17 cases from an organization of over 7000 members [ 2] despite multiple solicitations. But, in addition to the chief purpose of the registry (to answer key questions about the treatment), he noted a number of “by-products,” one of which was a “more or less acceptable standard classification.” (Diagnostic criteria for osteogenic sarcoma were far from clear and in citing an earlier study [ 3] Codman noted that of 148 cases referred for bone sarcoma, only 68 could be confirmed as “malignant newgrowth of bony origin.”) Codman himself then proposed 25 clinical, radiographic, and histologic diagnostic criteria.
Anzeige
The concept of a registry is now well developed in a number of industrialized countries (mostly but not entirely related to joint arthroplasty), although never successful in the United States for mostly political and economic reasons. It is fair to say, however, that Codman was far ahead of his time. His concept of the End Result is certainly the forerunner of today’s “evidence-based medicine.” His reasoning for establishing registries is as cogent today as then, and if the philosophical and emotional objections to his ideas are less 100 years later, we still lack the political will to institute such registries in the United States. The importance of his ideas cannot be overemphasized.
Open Access This is an open access article distributed under the terms of the Creative Commons Attribution Noncommercial License ( https://​creativecommons.​org/​licenses/​by-nc/​2.​0 ), which permits any noncommercial use, distribution, and reproduction in any medium, provided the original author(s) and source are credited. 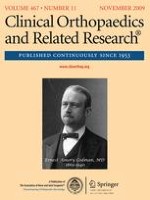 Is Vertical-center-anterior Angle Equivalent to Anterior Coverage of the Hip?

The Classic: The Registry of Bone Sarcomas as an Example of the End-Result Idea in Hospital Organization

Thigh Pain in a 73-year-old Man