Somatostatin analogues are the cornerstone of systemic therapy for metastatic well-differentiated gastroenteropancreatic neuroendocrine tumours for both hormonal control and antiproliferative effect. Dose escalation of somatostatin analogues is often utilized in clinical practice, but small studies have yielded mixed results. The aim of this study was to systematically determine the efficacy and safety of escalated-dose somatostatin analogues in the above setting.

Eighteen studies (1002 patients) were identified. The risk of bias was moderate for objective response outcomes, but high for the outcomes of symptom control and toxicity due to open-label trial designs. Disease control rates ranged from 30 to 100%, but response rates were modest (at 0–14%). Rates of biochemical improvement (27–100%) and symptom improvement (23–100%) ranged widely depending on the population studied and the definition of response. The most common toxicities were fatigue, diarrhoea, abdominal discomfort and cholelithiasis, with no severe or unexpected toxicities compared to standard-dose somatostatin analogues.

The current evidence indicates that escalated-dose somatostatin analogues are well-tolerated in patients with gastroenteropancreatic neuroendocrine tumours, with significant rates of disease control but low rates of tumour response. It was difficult to judge the exact rate of biochemical response or symptomatic improvement. There is a need for large, prospective studies investigating the role of escalated-dose somatostatin analogues in the treatment of metastatic gastroenteropancreatic neuroendocrine tumours. 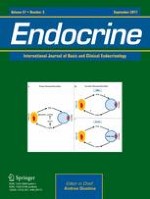 The intriguing connections of leptin to hyperparathyroidism