Estimation of the firing range is often critical for reconstructing gunshot fatalities, where the main measurable evidence is the gunshot residue (GSR). In the present study intermediate-range gunshot wounds have been analysed by means of a micro-computed tomography (micro-CT) coupled to an image analysis software in order to quantify the powder particles and to determine the firing distance. A total of 50 shootings were performed on skin sections obtained from human legs surgically amputated for medical reasons. For each tested distance (5, 15, 23, 30 and 40 cm), firing was carried out perpendicularly at the samples using a 7.65-mm pistol loaded with jacketed bullets. Uninjured skin sections were used as controls. By increasing the firing distance, micro-CT analysis demonstrated a clear decreasing trend in the mean GSR percentage, particularly for shots fired from more than 15 cm. For distances under 23 cm, the powder particles were concentrated on the epidermis and dermis around the hole, and inside the cavity; while, at greater distances, they were deposited only on the skin surface. Statistical analysis showed a nonlinear relationship between the amount of GSR deposits and the firing range, well explained by a Gaussian-like function. The proposed method allowed a good discrimination for all the tested distances, proving to be an objective, rapid and inexpensive tool for estimating the firing range in intermediate-range gunshot wounds. 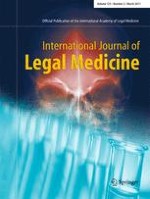 The new influenza A (H1N1/09): symptoms, diagnostics, and autopsy results