Glioma is an aggressive primary Neuro-epithelial tumor with dismal prognosis, since there is a lack of molecular work-up during routine radiological monitoring of the disease. Currently, a number of potential molecular prognostic and predictive biomarkers are being characterized in line with structured diagnosis defined in World Health Organization guidelines 2016. Human-telomerase reverse-transcriptase (hTERT), a marker of proliferation and maintenance of genomic integrity has thus been investigated for its clinical relevance as an independent prognosticator in glioma. Expression of the protein in tumor tissue and in plasma of 72 diffuse glioma patients (astrocytoma) grade II–IV was determined and compared with relevant controls using immunofluorescence-immunohistochemistry and enzyme-linked immuno-sorbent assay. Appropriate statistical tests were applied to establish a correlation between on-site tumor and circulating levels of the marker and its independence of covariates. Expression of the marker in glioma tissues was significantly different from controls (p < 0.0001) and could discriminate within grades with ≥80% sensitivity. The tissue and plasma levels were positively associated with grades (r = 0.8845, p < 0.0001) and (r = 0.2834, p = 0.0158) respectively, while an inverse correlation with overall survival (r = −0.6558, p < 0.0001) and (r = −0.3941, p = 0.0006) respectively, was recorded. Plasma hTERT was significantly correlated with corresponding intra-tumor expression of hTERT (r = 0.2794, p = 0.0175). Multivariate Cox-regression identified plasma hTERT (p < 0.0005) as a prognostic factor; not associated with age, site or extent of resection (p > 0.05). This is the first experimental evidence for association of higher plasma levels of hTERT with overall survival in both low and high grade glioma. 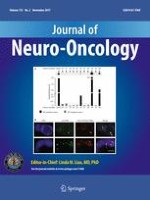 Do we still need IQ-scores? Misleading interpretations of neurocognitive outcome in pediatric patients with medulloblastoma: a retrospective study

Extraneuraxial metastases in medulloblastoma: is histology and molecular biology important?