To evaluate the influence of preoperative mitomycin C (MMC) on the proliferative behavior of fibroblasts and fibrovascular tissue derived from the primary pterygium using the immunohistochemical method (Ki67 and CD34).

Sixty-five patients with primary pterygium were randomly selected and divided into one of three groups. The control group had 29 patients that were only submitted to pterygium removal. The group that received the MMC injection a month before surgery had 16 patients, and the group that received the MMC 2 weeks before surgery had 20 patients. Each patient only had one eye operated on.

Sixty-five patients were selected to undergo pterygium excision surgery. We randomly placed the patients into three groups: one without MMC (n = 29), one with MMC application 1 month before surgery (n = 16) and another with MMC application 2 weeks before surgery (n = 20). Subconjunctival injection was applied with 0.1 ml of 0.02% MMC in the pterygium body, and patients were followed for 2 years.

Of the total 29 patients (44.6%) in the control group (without MMC application), 11 cases had recurrence (37.9%), of which seven (63.6%) were within 3 months of follow-up and four (36.3%) within 6 months of follow-up. The mean proliferation index of the recurrent cases was 4.5%, and of the cases without recurrence, it was 6.1%. There were 16 patients (24.6%) in the MMC application group 1 month before surgery, in which one case (6.25%) recurred at 6 months. In the group with MMC application 2 weeks before surgery, of the total of 20 patients (30.7%), there was one case of recurrence (5%) at 6 months. The proliferation index of the group that had MMC administered and did not have a recurrence was 7.2%, and in the group with recurrence, it was 6.4%. The CD34-labeled cell count was 5.8% among cases with recurrence and 5.6% in cases without recurrence. No side effects of MMC application were reported during the study follow-up period.

MMC was efficient to reduce the recurrence index despite the absence of a direct relation with its antimitotic and antiangiogenic effect in the samples that were analyzed. 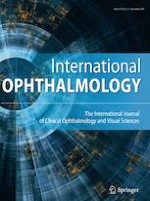 The efficacy of standard versus accelerated epi-off corneal cross-linking protocols: a systematic review and sub-group analysis