Pulmonary perfusion is not spatially homogeneously distributed, and its variations could be of diagnostic value in lung vascular disease. PulmoBind is a ligand of the adrenomedullin receptor densely expressed in endothelial cells of lung capillaries. The aim of this study was to evaluate spatial distribution of human lung perfusion by using this novel molecular tracer of the pulmonary vascular endothelium.

Normal humans (n = 19) enrolled into the PulmoBind phase I trial were studied (Clinicaltrials.gov.NCT01539889). They were injected with 99mTc-PulmoBind for SPECT imaging. Results were compared with 99mTc-PulmoBind in quadruped mammals (dogs, n = 5). Imaging was performed in the supine position and distribution of activity was determined as a function of cumulative voxels along the different anatomical planes.

The perfused pulmonary circulation of supine humans, assessed by an adrenomedullin receptor ligand, is not homogeneously distributed with more prominent distribution in dorsal and caudal regions. It is qualitatively similar to a supine quadruped mammal confirming the presence of a microcirculatory gravitational perfusion gradient detectable with this tracer. Future studies are needed to determine if this novel endothelial cell tracer could be used to detect physiologic and pathologic variations of lung perfusion such as in pulmonary hypertension. 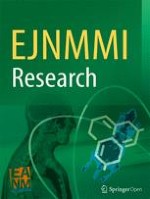 [18F]tetrafluoroborate as a PET tracer for the sodium/iodide symporter: the importance of specific activity

The effect of isoflurane on 18F-FDG uptake in the rat brain: a fully conscious dynamic PET study using motion compensation