The aims of this study were to assess the individual roles of nasal endoscopy (NE) and computed tomography (CT) in the diagnosis of chronic rhinosinusitis, to evaluate their sensitivity and specificity and determine the superiority of one over the other, if any. The study was conducted over 19 months on patients above 18 years of age attending the ENT OPD at Jaipur Golden Hospital, Rohini, Delhi with persistence of symptoms of chronic rhinosinusitis (CRS) for ≥12 weeks. NE was done in each patient followed by NCCT-PNS (4 mm cuts) evaluated with the Lund Mackay system and score ≥4 was suggestive of disease. On NE, mucopurulent discharge and edema in the middle meatus and ethmoid region were all seen in equal distribution amongst the patients. Polyps in the middle meatus were identified in the least number of patients. On observation for anatomical variants, paradoxical middle turbinate was seen in most patients and prominent agger nasi region in the least patients. On CT the order of involvement of the paranasal sinuses from most to least was—anterior ethmoids, maxillary sinus, posterior ethmoids, sphenoid and frontal sinuses. Ostiomeatal complex was involved in approximately one-third of the patients who had been diagnosed with CRS with CT. Frequency of disease on DNE and CT had a sensitivity of 72.2% and specificity of 63.6% with a p value of 0.024, and positive and negative predictive values of 61.9 and 73.7% respectively. It was concluded at the end of the study that there was a significant correlation between DNE and CT in the diagnosis of CRS. 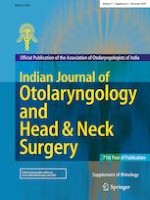 Sinonasal Mucormycosis: A to Z

A Venous Malformation of the Inferior Turbinate: A Case Report with Review of the Literature