Although laparoscopic surgery is frequently performed for the treatment of gastric cancer, laparoscopic total gastrectomy is not widely performed because of its technical difficulty. Since December 2007 we have performed esophagojejunostomy after totally laparoscopic total gastrectomy (TLTG) in more than 110 cases in our institution by using a circular stapler with a trans-orally inserted anvil. We performed a single-center comparative study to evaluate the safety and efficacy of esophagojejunostomy using a trans-orally inserted anvil in patients who underwent TLTG for the treatment of gastric cancer.

In the present study, we examined 329 patients with gastric cancer who underwent esophagojejunostomy using a circular stapler after total gastrectomy. Data on the clinicopathological features, operative time, amount of intraoperative blood loss, and incidence of anastomosis-related complications among the surgical groups were obtained by reviewing the medical records, which were then analyzed.

We believe that esophagojejunostomy using a trans-orally inserted anvil after TLTG for gastric cancer is a safe and useful surgical procedure. 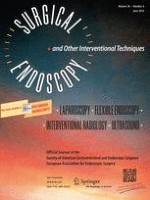 Is laparoscopy a safe approach for diffuse appendicular peritonitis? Feasibility and determination of risk factors for post-operative intra-abdominal abscess

Performance of the forward-viewing linear echoendoscope for fine-needle aspiration of solid and cystic lesions throughout the gastrointestinal tract: a large single-center experience