The aim of this study are to analyze the value of the body mass index (BMI) to diagnose obesity in the population of Fuzhou, China, and to determine the BMI optimal cut-off and percentage body fat (BF%) values for obesity. A retrospective analysis was performed on 2,317 volunteers, ages 20–87 years, from Fuzhou, China. In this study, the World Health Organization (WHO) BF% criteria to diagnose obesity were set as the reference standard. Receiver operating characteristic curve, Venn diagram, and evaluation indicators of diagnostic tests were plotted to determine the performance of BMI as defined by the 1999 WHO criteria, the 2002 Asian criteria, and the 2002 Chinese criteria. The obesity detection rates were 3.02, 32.54, and 9.37 % for the WHO, Asian, and Chinese criteria, respectively. In all cases, the values were lower than the one determined by the BF% criteria (39.15 %). Of the obese subjects defined by BF% criteria, false-negative rates yielded by using the three BMI criteria described above were 35.87, 12.13, 28.35 % for male subjects and 36.56, 17.71, 32.46 % for female subjects. For the population of Fuzhou, China, the optimal BMI cut-off points to diagnose obesity were 24.45 kg/m2 for male subjects and 23.16 kg/m2 for female subjects. Current BMI criteria have high false-negative rates and underestimate the prevalence of obesity. The optimal BMI cut-off point for the population of Fuzhou, China, needs further characterization. 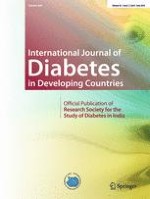 Erratum to: Is body mass index a good indicator of obesity?

The study of diabetes prevalence and related risk factors in Fuyang, a Chinese county under rapid urbanization

Is body mass index a good indicator of obesity?