The aim of this study is to evaluate secondary intention healing process and postoperative pain of oral soft tissues after laser surgery with the use of a compound containing chlorhexidine and sodium hyaluronate.

A solution containing sodium hyaluronate and chlorhexidine is a good support to increase wound healing by secondary intention after laser biopsy, but no differences were in postoperative perception of pain.

The use of the tested solution can be recommended after laser oral biopsies, to achieve a healing without suture. About the postoperative pain, the compound has not showed the same results and did not have measurable effects.

Oral biopsy is a standard procedure for the diagnosis of oral mucosa lesions. It is a surgical treatment that can provoke secondary effects like pain and inflammation, depending on the degree of the tissue damage produced [1].
Thanks to its features, laser is often used to perform oral biopsies. In fact, it carries out several advantages to daily surgical procedures for the operator and patient, comprehending a partial decontamination of the surgical field, less bleeding, thanks to the laser-hemoglobin interaction, with greater visibility and the possibility to execute surgery in patients with coagulation disorders, in particular using the diode laser [2‐4]. Furthermore, it consents to have less postoperative pain, inflammation, and as one of the best benefits, wound healing by secondary intention thanks to the coagulation capacity [5‐7]. Oral biopsy performed by laser permits to not use suture that can delay healing by plaque increasing [8].
Anzeige
Healing by primary intention provides a mechanism with deposition of proteoglycans, collagen, and proteins to form a connective extracellular matrix instead of healing by secondary intention permits a heal by contraction, with tissue movement from the margin to the center of wound. This healing is based on a complex mechanism between contractile fibroblast and extracellular matrix [9]. A wound generally heals into four phases, characterized by specific markers and condition comprehending, hemostasis, inflammation, proliferation, and remodeling phases. The healing starts at the moment of an injury with hemostasis, where the platelets release clotting factors, growth factors, and cytokines. In the next phase, neutrophils begin the phagocytosis and remove bacteria, damaged tissue, and foreign materials with the aid of macrophages. Afterwards, fibroblasts migrate and deposit new extracellular matrix recovering structure and function to the tissue, a characteristic of proliferative phase. During this phase, the predominant cell is fibroblast that produces collagen and glycosaminoglycans like ialuronic acid. The last phase is the remodeling one, where collagen matrix begins to be organized [10].
Hyaluronic acid (HA) is a molecule introduced to promote wound healing [11], found in many tissues [12]. It has got numerous properties bringing advantages for wound healing such as granulation tissue formation, inhibition of destructive inflammation, and promotion of angiogenesis and reepithelization [11, 13]. HA is used in numerous medical disciplines; it is devoid of toxicity and for topical oral use is available in gel or liquid preparation [12, 14].
In literature, it has been shown that wound healing can be facilitated and accelerated by the application of sodium hyaluronate stimulating fibroblasts, increasing the production of growth factors and the biosynthesis of different types of collagen [15].
Romeo et al. [16] evaluated in a randomized clinical study, the healing of soft tissue after laser surgery, with or without the use of a gel based on amino acids and sodium hyaluronate. Patients have been divided into a study group, where amino acid and sodium hyaluronate-based gel was administered and in a control group, in which no substance was applied on the wound. The results showed a rate of better healing and more rapid tissue repair of the wounds in the study group.
Anzeige
Another study conducted by Mariggio’ et al. [15] evaluated the effects induced by the high molecular weight of HA and a pool of amino acids on the proliferation of human fibroblasts and deposition of collagen I and III. It has been also studied the action on the production of growth factors involved in angiogenesis, deposition of extracellular matrix proteins and expression of pro-inflammatory cytokines fundamental for the recall of macrophages, and proliferation of keratinocytes.
In many cases, post-operative instructions after oral biopsy involving the use of chlorhexidine have been considered a good prophylactic against postoperative infection, also due to the fact that patients cannot maintain good oral hygiene [17‐19].
In virtue of this, the application of CURASEPT®ADS020 TRATTAMENTO RIGENERANTE (CURADEN HEALTHCARE), a solution composed of chlorhexidine digluconate 0.2% and sodium hyaluronate 0.2%, has been recommended to treat the symptoms and the wound healing of oral laser biopsy lesions with different etiologies.
Biopsy is necessary to obtain a definitive diagnosis of oral lesions, so it is important to reduce postoperative pain, decrease the healing time, and have a clear understanding of post-operative course associated to this procedure and to better support patients during the postoperative course.
The aim of the present study was to evaluate the efficacy of rinses with a solution of sodium hyaluronate and chlorhexidine digluconate, in improving laser wound healing and pain experienced by patients after oral mucosa biopsy, comparing it with the use of only chlorhexidine or placebo solution.

This randomized double-blind clinical study was performed at the Complex Operative Unit of Stomatology of the Department of Oral and Maxillo-Facial Sciences, “Sapienza” University of Rome, Italy, from October 2014 to May 2017. According to the Declaration of Helsinki (2008), all patients participating at the study were properly informed about its features, and before starting the clinical section, they had to read and sign a written informed consent. Moreover, the study protocol was approved by the Ethics Committee of the “Sapienza” University of Rome (protocol reference: CE 4011).
The inclusion criteria consisted in the presence of a benign lesion (Fig. 1), like fibromas, mucoceles, and HPV lesions, in different areas of the oral cavity, such as the buccal mucosa, tongue, and lips, requiring histopathologic analysis for diagnostic purposes. Patients affected by systemic diseases, problems of hemostasis, and coagulation, with poor oral hygiene and with an allergy or hypersensitivity to the used products, were excluded from the study.
×
To determine the sample size, a power of 80% was considered, with beta-value of 0.20, a confidence level of 95% and a confidence interval of 5. A sample size calculator made by Creative Research Systems was used and indicated 47 patients to validate the study.
Anzeige
Before each intervention, patients were randomly allocated from a computer-generated list of random numbers into one of three groups (Study Group or SG, Control Group or CG, Placebo Group or PG) (Fig. 2).
×
Allocation concealment was achieved through the provision, by professionals not involved in patient enrollment, of a numbered sequence of opaque and sealed envelopes containing the assignment code. The list remained inaccessible, and the envelopes were opened, sequentially, after enrolling the patient and obtaining consent.
Oral biopsies have been performed using a diode laser (980 nm, 2.5 W in CW, fluence 1990 J/cm2, with a fiber diameter of 400 μm, LEONARDO®, DMT s.r.l.—20851 Lissone (MB)—Italy) by the same operator in order to minimize differences due to operator variability. Local anesthesia, with 1.8 mL of mepivacaine solution (MEPIVACAINA PIERREL®, 30 mg/ml, injection solution 1.8 ml, Pierrel Spa, Milan, Italy), was administered before the beginning of each surgical intervention, and after surgery, all samples have been sent to the pathologist for histological evaluation and diagnosis.
No sutures have been applied to obtain wound healing by secondary intention (Fig. 3).
×
Anzeige
After biopsy:
The mouthwashes were provided to the patient by our unit. Each of them had an X, Y, and Z code according to the compound used. X represented the SG, Y the CG, and Z the PG.
The patient and the operator were unaware of the contents of the mouthwash (double-blind study).
Furthermore, instructions have been given to patients in order to not take any liquid or solid foods and to abstain from rinsing their mouths for at least 30 min after the application of the compound to obtain a good distribution and absorption. No other medications (such as antibiotics or FANS) have been prescribed thanks to laser advantage in decreasing postoperative pain [2, 3]. Wound healing evaluation has been performed using digital photographic controls taken immediately after surgery (T0), 7 days after surgery (T1), and 14 days after surgery (T2). Pictures have been taken with a digital camera (NIKON D200®, Nikon Corporation, Tokyo, Japan) through the use of an L-shaped graph paper benchmark (with 1-mm intervals) (Fig. 4), put on the sides of the treated area. The obtained high-resolution pictures were edited using graphics software (ADOBE PHOTOSHOP CC®, Adobe Systems, San Jose, CA). After having delimited the lesion edges and set 1 mm value with benchmark, the area has been calculated in square millimeters (Fig. 5) to obtain three different values: the wound area at T0, the wound area at T1, and the wound area at T2. The resulting values have been examined to calculate a percentage value, called percentage healing index (PHI) at T1 and T2. First, the T1 area was divided by the T0 area before it was multiplied by 100, and then, the same procedure with T2 divided by T0. The obtained value, also called percentage unhealed index (PUI), represented the percentage of the lesion that did not heal over a 7-day period or 14-day period. The complementary value to this percentage was defined as the PHI at T1 and PHI at T2 (e.g., PUI = T1/T0 · 100 = 16.6 mm2/50.2 mm2 · 100 = 33.06%; PHI = 100–PUI = 100–33.06 = 66.94%).
×
×
Anzeige
Numeric rating scale (NRS) was used to evaluate the severity of pain. This NRS consisted in a 100-mm horizontal line, using a 10-point, anchored at one end with the words “no pain” or value 0 and at the other end with the words “worst pain imaginable” or value 10, with intermediate values from 1 to 9. Each patient was instructed how to use the scale and asked to mark the intensity of pain at 2, 4, 6, 8, 12, and 24 h after biopsy, and daily for the next 6 days. The measurements were recorded by patients at home always at 12:00 p.m. and after 7 days from biopsy they have been visited (Fig. 6).
×
After this clinical section, patients’ age and gender, biopsy site, PHI at T1, PHI at T2, and pain felt have been collected and statistically analyzed.

Data were statistically described in terms of mean, standard deviation (SD), median and range, or frequencies (number of cases) and percentages when appropriate. For comparing categorical data, chi-square test was performed. Comparison of PI between the groups for any interval time and comparison of PHI between the groups was done using Kruskall-Wallis test with multiple post hoc two-group comparisons. Exact test was used instead when the expected frequency is less than 5. p values less than 0.05 were considered statistically significant. All statistical calculations were done using computer program GraphPad 7 (GraphPad Software, La Jolla, CA) for Mac Os.

The results of the study showed that the application of a solution with a compound of sodium hyaluronate and chlorhexidine digluconate on surgical wounds after oral mucosa laser biopsy can significantly improve the healing process and then wound healing. So, the use of this compound can be recommended in all cases where laser surgical procedures are needed, in order to better achieve a healing by secondary intention. Therefore, even if the followed protocol showed the effectiveness and validity of the product with excellent properties in tissue repair, more cases are needed to better minutely investigate its action. 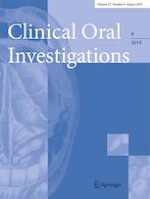 Treatment outcomes and prognostic factors of medication-related osteonecrosis of the jaw: a case- and literature-based review