Patients with chronic thromboembolic pulmonary hypertension (CTEPH) need anticoagulant therapy for life. Conventionally, vitamin K antagonists (VKAs) have been used and data about direct oral anticoagulants (DOACs) in CTEPH patients are lacking. Recently, balloon pulmonary angioplasty (BPA) has emerged as a treatment option for CTEPH. However, there are no reports examining the effects of DOACs and VKAs on the hemodynamics of patients after BPA. The aim of this study was to compare DOACs and VKAs regarding the hemodynamic changes in patients with CTEPH treated by BPA. Patients who were treated by BPA and underwent follow-up right heart catheterization 6 ± 1 months after the final BPA procedure were included in this study. The subjects were divided into two groups based on the anticoagulant administered, and hemodynamic changes (mean pulmonary artery pressure, mPAP; pulmonary vascular resistance, PVR; cardiac index, CI) were assessed. Of the 65 consecutive patients, 29 met the inclusion criteria (DOAC-group n = 14, VKA-group n = 15). Compared to pre-BPA, post-BPA hemodynamic parameters were improved in both groups. There was no significant difference between the two groups regarding pre-BPA, post-BPA, 6Mo-f/u and Δhemodynamic parameters (difference between 6Mo-f/u and post-BPA, ΔmPAP, − 0.7 ± 3.3 vs. − 2.7 ± 5.4 mmHg, p = 0.24; ΔPVR, − 41.9 ± 80.9 vs. − 16.4 ± 74.1 dyne s/cm5, p = 0.38; ΔCI, − 0.06 ± 0.35 vs. − 0.10 ± 0.35 L/min/m2, p = 0.80; DOAC-group vs. VKA-group, respectively). Hemodynamic improvement by BPA was maintained over 6 months of follow-up irrespective of the type of anticoagulant administered in CTEPH patients. 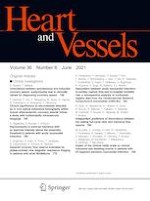