Understanding decisions of deep learning techniques is important. Especially in the medical field, the reasons for a decision in a classification task are as crucial as the pure classification results. In this article, we propose a new approach to compute relevant parts of a medical image. Knowing the relevant parts makes it easier to understand decisions.

In our approach, a convolutional neural network is employed to learn structures of images of lung nodules. Then, an evolutionary algorithm is applied to compute a simplified version of an unknown image based on the learned structures by the convolutional neural network. In the simplified version, irrelevant parts are removed from the original image.

In the results, we show simplified images which allow the observer to focus on the relevant parts. In these images, more than 50% of the pixels are simplified. The simplified pixels do not change the meaning of the images based on the learned structures by the convolutional neural network. An experimental analysis shows the potential of the approach. Besides the examples of simplified images, we analyze the run time development.

Simplified images make it easier to focus on relevant parts and to find reasons for a decision. The combination of an evolutionary algorithm employing a learned convolutional neural network is well suited for the simplification task. From a research perspective, it is interesting which areas of the images are simplified and which parts are taken as relevant. 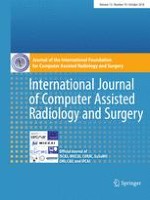 Probe versus microscope: a comparison of different methods for image-to-patient registration

Analytical derivation of elasticity in breast phantoms for deformation tracking