There is no established non-invasive method to diagnose patients with endometriosis. As a nondestructive type of radiation, infrared light might be used for discrimination by causing vibration of the covalent bonds of the molecules when absorbed by the tissues. The aim of the study was to test whether cervical swab can be used to diagnose women with endometriosis using Fourier transform infrared spectroscopy (FTIR).

In this prospective case–control study, women between 18–45 years old and undergoing laparoscopy due to various reasons were recruited (n = 20). According to the findings during laparoscopy, patients were stratified as stage I–II or stage III–IV endometriosis groups. Women lacking any visible lesions of endometriosis were recruited as controls. A cervical swab was taken from all patients just before the surgical procedure and pulled into a tube containing saline solution. FTIR spectra were obtained and the fingerprint region (1750–850 cm−1) was used for analyses.

Finally, three samples in stage I–II, five samples in stage III–IV and five samples in the control group were analyzed. Hierarchical cluster analysis and principal component analysis were performed as the chemometric method. A total of ten observable peaks were detected in the absorbance spectra of samples. The peaks at 1450 and 1405 cm−1 originating from lipids and proteins significantly increased in the stage III–IV endometriosis group when compared with controls. In addition, nucleic acid/carbohydrate ratio was significantly lower in the stage I–II group indicating that the alteration of the carbohydrate level might be important.

Examination of cervical swab with FTIR spectroscopy might be a proper candidate for a non-invasive diagnostic approach of endometriosis. 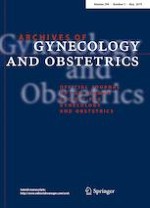 The impact of EndoPredict ® on decision making with increasing oncological work experience: can overtreatment be avoided?

Patients’ perspectives towards malignant ascites: results of a prospective observational trial regarding expectations, characteristics and quality of life—a study of the North-Eastern-German Society of Gynecological Oncology