Paragangliomas are the most common extra-adrenal pheochromocytoma. Symptomatic and growing tumors demand surgical extirpation. Minimally invasive techniques allow surgeons to perform the procedure without wide exposure and mobilization of intra-abdominal organs. To our knowledge, we present the fourth case of robotic excision of a large retroperitoneal paraganglioma.

An 18-year-old unmarried female presented with occipital headache for past 3 years. She also had palpitations and sweating. Ultrasound abdomen revealed a presacral mass of 4 × 4 × 3 cm, and on further evaluation, CECT abdomen characterized 5 × 3.2 × 4 cm well-defined heterogenous mass with intense enhancement in retroperitoneum near presacral region. Functional work-up revealed increased normetanephrine of 3723 mcg/dl and metanephrine of 273 mcg/dl. Patient underwent transperitoneal robot-assisted excision of the mass by fourth-generation da Vinci robotic system. After locating the mass of size 7 × 5 × 3 cm in the presacral region, dissection was carried out all around the mass. Intra-operative hypertensive episodes were managed by esmolol infusion. Feeding vessels were identified, clipped and cut. Resected mass was entrapped in specibag and retrieved intact.

Blood loss was around 50 ml and operative duration was 120 min. In the postoperative period, her blood pressure became normal. Patient was discharged on POD 4. Histopathology was confirmatory of paraganlioma.

Presacral tumors, especially those growing anterior, can be successfully removed with the da Vinci robotic system, and this approach can become the standard for manipulation of this kind of tumor irrespective of its size and malignancy. 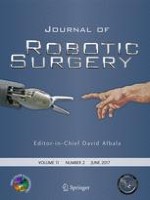 Robotic repair of a large abdominal intercostal hernia: a case report and review of literature

How robotic-assisted surgery can decrease the risk of mucosal tear during Heller myotomy procedure?