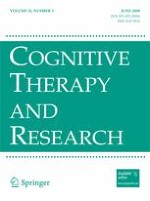 How Do the Dimensions of Perfectionism Relate to Mental Health?

The Impact of Intensive Mindfulness Training on Attentional Control, Cognitive Style, and Affect

The Role of Anxiety Sensitivity in Eating Pathology

Construction of Self and Others in Unipolar Depressive Disorders: A Study Using Repertory Grid Technique

The Impact of Goal Cognition and Pain Severity on Disability and Depression in Adults with Chronic Pain: An Examination of Direct Effects and Mediated Effects via Pain-Induced Fear