Since thermal damage persists until the completion of stenosis, EBD in the initial stage should be carefully performed. An extension effect was observed only at the laceration site and it later returned to a status similar to that of surrounding locations. Additional intervention would be required for preventing restenosis. 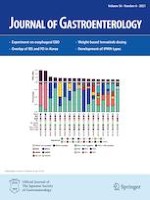 Gender difference in the overlap of irritable bowel syndrome and functional dyspepsia: a prospective nationwide multicenter study in Korea