Molecular constituents regulated by the microenvironment components profoundly influence the propensity of cancer metastasis, a key event of estimating therapeutic actions of anticancer drugs. On one hand, kynurenine (Kyn), one of the microenvironment components, plays key roles in the metastasis of cancer cells in vivo; on the other hand, forkhead box O3 (FOXO3) can serve as a therapeutic target of various anticancer drugs. However, the effect of Kyn on FOXO3 is still not clear. The current study demonstrated that the selected dose of Kyn significantly upregulated the FOXO3 protein rather than FOXO3 messenger RNA (mRNA) in the lung cancer 95D cells. However, only 50 μM Kyn markedly reduced miR-30b expression at the same time. Furthermore, the direct interaction between FOXO3 mRNA and miR-30b was also confirmed by dual-luciferase assay system. More importantly, miR-30b-induced suppression of FOXO3 protein was significantly attenuated on Kyn treatment, which demonstrated that Kyn-mediated increase of FOXO3 depended at least partly on miR-30b. In addition, Kyn-mediated upregulation of migration, a method of measuring cancer metastasis, was markedly decreased on miR-30b treatment, in vitro, which was altered in some degree via regulating FOXO3. These results suggest that miR-30b plays important roles in Kyn-induced increase of FOXO3 expression. 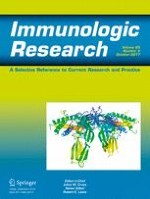 Is there an association between pemphigus and hepatitis viruses? A population-based large-scale study

Signaling interactions predicted by the Tritope model of the TCR