Violence committed by extremists has serious violent and non-violent public health consequences. Researchers have hypothesized an association between experiencing discrimination and support for radicalization. This study examines the relationship between perceived discrimination and support for violent extremism among youth and young adults in Belgium.

A total of 2037 young adults between the ages of 16 and 30 participated in the study. We used multivariate linear regression to determine the association between sociodemographic characteristics, experiences of perceived discrimination, and scores on the Radical Intention Scale (RIS).

Public health primary prevention programs and policies that target the relationship between discrimination and sympathy for violent radicalization need to be situated on micro- to macro-levels. Of primary importance is the development of partnerships between stakeholders in public health, legal, political, and educational sectors to develop strategies to diminish discrimination and promote positive civic engagement among youth. 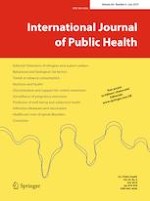 Fueling an epidemic of non-communicable disease in the Balkans: a nutritional survey of Bosnian adults

Association between human papillomavirus and chlamydia trachomatis infection risk in women: a systematic review and meta-analysis

Thirty-eight-year trends of educational differences in smoking in Finland