The fusion gene BCR-ABL has an important role to the progression of chronic myeloid leukemia (CML) and several signaling pathways have been characterized as responsible for the terminal blastic phase (BP). However, the initial phase, the chronic phase (CP), is long lasting and there is much yet to be understood about the critical role of BCR-ABL in this phase. This study aims to evaluate transcriptional deregulation in CD34+ hematopoietic cells (CD34+ cells) from patients with untreated newly diagnosed CML compared with CD34+HC from healthy controls.

Gene expression profiling in CML-CD34 cells and CD34 cells from healthy controls were used for this purpose with emphasis on five main pathways important for enhanced proliferation/survival, enhanced self-renewal and block of myeloid differentiation.

We found 835 genes with changed expression levels (fold change ≥ ±2) in CML-CD34 cells compared with CD34 cells. These include genes belonging to PI3K/AKT, WNT/b-catenin, SHH, NOTCH and MAPK signaling pathways. Four of these pathways converge to MYC activation. We also identified five transcripts upregulated in CD34-CML patients named OSBPL9, MEK2, p90RSK, TCF4 and FZD7 that can be potential biomarkers in CD34-CML-CP.

We show several mRNAs up- or downregulated in CD34-CML during the chronic phase. 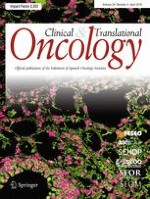 Treatment of childhood astrocytomas with irinotecan and cisplatin