Janus kinases (JAKs) are non-receptor protein tyrosine kinases that are expressed in many tissues. Once the JAKs are activated, a cascade of further signaling events is triggered involving phosphorylation of selected receptor chain tyrosines, binding of signal transducer and activator of transcription (STAT) proteins and phosphorylation of these STATs. Due to their ability to selectively modulate immune function, targeted JAK inhibitors are promising candidates for some skin diseases such as psoriasis and atopic dermatitis. The aim of this study was to assess the level of JAK1 in both vitiligo and psoriasis patients before and after treatment with NB-UVB which is considered a gold standard therapy for both diseases. This study was conducted on 10 patients with psoriasis, 10 patients with vitiligo and 10 controls. JAK1 levels before and after treatment with NB-UVB 311 nm (36 sessions) were measured using Western blot assay. The level of JAK1 was significantly higher in vitiligo and psoriasis patients than controls. There was a decline in the level of JAK1 after treatment, which was statistically significant. VASI and PASI scores of patients decreased after treatment with NB-UVB. In psoriatic patients, the JAK1 level positively correlated with the female participants, disease duration and PASI change. It was concluded that JAK1 plays a role in the pathogenesis of both vitiligo and psoriasis based on its upregulated level before treatment and downregulated level after treatment. This raises the possibility of using the JAK1 inhibitors as targeted immunotherapy for vitiligo and psoriasis. 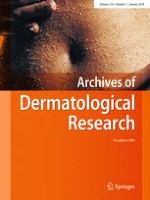 Is the DLQI appropriate for medical decision-making in psoriasis patients?