Expression profiles of HER2, EGFR, MET and FGFR2 in a large cohort of patients with gastric adenocarcinoma | springermedizin.de Skip to main content
TOOLBAR 1 2 3 4
SUCHE MENÜ 1 2 3 4

Some tyrosine kinase receptors (RTKs) play critical roles in gastric cancer progression. Not only trastuzumab, but also several other agents targeting RTKs are being investigated for gastric cancer therapy. However, the simultaneous expression of multiple RTKs, which may interfere with the effectiveness of therapeutic agents, has not been evaluated in a large cohort with gastric adenocarcinoma (GAC).

We performed a tissue microarray analysis in 950 patients with GAC who underwent a gastrectomy without preoperative chemotherapy. The protein expressions of HER2, EGFR, MET and FGFR2 were evaluated using immunohistochemistry, and the gene amplifications of HER2, EGFR and MET were examined using dual-color in situ hybridization.

The frequency of overexpression was 11.8 % for HER2, 23.5 % for EGFR, 24.9 % for MET and 31.1 % for FGFR2. Whereas strong staining for each of the RTKs was heterogeneous, tumors with homogeneously strong staining areas often exhibited gene amplification. Strong EGFR expression was significantly associated with a poor outcome, but no prognostic correlations were observed in other RTKs. The overexpression of single and multiple RTKs was observed in 40.4 and 22.7 % of the cases, respectively. HER2, EGFR, MET and FGFR2 predominance was observed in 10.1, 13.9, 16.1 and 22.9 % of the GACs, respectively. 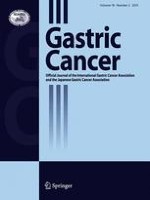 Post-therapeutic response evaluation by a combination of endoscopy and CT scan in esophagogastric adenocarcinoma after chemotherapy: better than its reputation