Localized breast angiosarcoma (LBA) is a rare condition with no prospective clinical trials guiding the management of afflicted patients. Management of LBA and the resulting outcomes on a nationwide scale has not been previously examined.

The National Cancer Data Base (NCDB) from 2004 to 2014 identified resected LBA patients. Treatment patterns were compared between three time periods (2004–2007, 2008–2011, and 2012–2014). Demographic and tumor characteristics, as well as treatments received—extent of surgery and adjuvant therapies—were analyzed for association with overall survival after adjustment for covariates.

The extent of surgery is not associated with improved survival in women with LBA, and patients may consider breast-conservation surgery. Adjuvant therapies are not associated with improved survival, with the exception of possible role of adjuvant chemotherapy in large primary tumors (5 cm or greater). Further clinical studies are needed to determine the impact of these treatments on local control, progression-free survival, and patients’ quality of life. Until then, the findings of our analysis will form basis for the multi-disciplinary discussion of management of women with LBA. 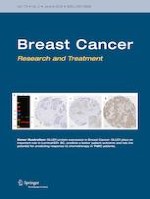 Loss of HER2 after HER2-targeted treatment