In very-preterm small-for-gestational-age (SGA) infants, long-term postnatal growth is confused with extrauterine growth restriction (EUGR). We aimed to document EUGR in SGA infants and in non-SGA infants (“true-EUGR”) and its relationship with fetal, maternal, and neonatal etiological factors. Four hundred seventy-nine very-preterm infants (< 32 weeks) born between 2003 and 2014 and attending the follow-up clinic were included. INTERGROWTH-21st preterm postnatal growth standards in conjunction with WHO Child Growth Standards were used to judge the postnatal growth patterns. EUGR was defined as weight < 10th percentile according to the sex at 36–34 weeks postmenstrual age, usually at discharge. Catch-up was evaluated at 2–2.5 years. Low-weight-for-age (wasting), low-length-for-age (stunting), and low-head-circumference-for-age were diagnosed if the z-scores were below − 2 SD. Logistic regression analysis estimated the association between the risk factors and EUGR, according to the SGA status at birth. Overall, EUGR occurred in 51% at 36–34 postmenstrual weeks and 21% at 2–2.5 years. However, among 411 non-SGA infants, “true-EUGR” rates were 43% and 15%, respectively.
Conclusion: By 2–2.5 years of age, a “true-EUGR” of 15% can be expected and only the head circumference normalizes in SGA infants. Low birth weight, hyaline membrane disease, bronchopulmonary dysplasia, and male sex were associated with “true-EUGR.” 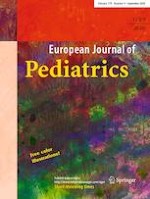 Towards advance care planning in pediatrics: a qualitative study on envisioning the future as parents of a seriously ill child

How do pediatric patients perceive adverse drug events of anticonvulsant drugs? A survey

Is there any association between age at menarche and anthropometric indices? A 15-year follow-up population-based cohort study