Despite interventions, childhood anemia is still a major public health problem in low and middle income countries. Purpose of the present study is to determine factors associated with anemia among rural primary school children in Sri Lanka, a country undergoing rapid socioeconomic changes.

Multi stage cluster sampling was used to select 100 rural schools in NCP and a maximum of 50 children aged 60–131 months were enrolled from each school. Self-administered questionnaires were sent to parents. Anthropometric measurements and blood samples were obtained by trained investigators. Blood reports were analyzed in a commercial laboratory with external quality control measures.

Total of 4412 children were included in the analysis. A Multiple regression was performed for hemoglobin. Only 4.2% of the change in hemoglobin could be explained by the model. District (p > 0.001), age (p > 0.001), timing of warm treatment(p = 0.026) and BMI for age (p = 0.002) uniquely contributed 1.12%, 1.19%, 0.13% and 0.26% to change in hemoglobin level respectively whereas, sex, monthly family income and frequency of meat and green leaf consumption didn’t contribute significantly.
Peripheral blood film analyses were available for 146 anemic children. Blood film was reported as normal in 19.9% while evidence of iron deficiency (18.5%), early iron deficiency (32.5%) and thalassemia trait with iron deficiency (29.5%) were reported in the rest.
Serum ferritin level was available for 417 children with hemoglobin less than 12 g/dl. Mean ferritin level was 63.7 microgram/l. Only 0.5% had depleted iron stores. A multiple regression was performed for serum ferritin and R2 was 0.123 (p < 0.001). Area under the curve for serum ferritin and anemia was 0.436. 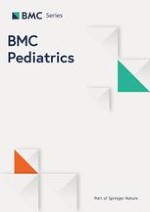 Celiac disease and Down syndrome mortality: a nationwide cohort study

Use of mobile phones and text messaging to decrease the turnaround time for early infant HIV diagnosis and notification in rural Zambia: an observational study