The purposes of this study are to confirm factors that affect the diameter of hamstring tendon autograft and to compare failure rates between the factors after anterior cruciate ligament (ACL) reconstruction.

A total of 296 patients that underwent reconstruction using hamstring tendon autograft at our clinics for ACL injury between September 2005 and June 2008 were enrolled for this study. The diameters of gracilis and semitendinosus tendons (harvested from the affected knee) and four-strand graft tendon made by folding the gracilis and semitendinosus tendons in two layers were measured. Before operating, we recorded the age, height, weight, Body Mass Index (BMI), gender and athlete versus non-athlete identity of the subjects and checked their correlations with graft diameters. Patients that recorded a grade C or D on the International Knee Documentation Committee Knee Examination Form, as well as patients that underwent revision, were defined as failures and analysed by related factors.

The mean diameter was 1.5 mm ± 0.2 for gracilis tendon, 2.2 mm ± 0.3 for semitendinosus tendon and 7.2 mm ± 0.7 for graft tendon. Except for age, factors including height, weight, BMI, gender and athlete versus non-athlete identity were found to be significantly related to graft diameter. Correlation was strongest with height (p < 0.001). With respect to failure rates after ACL reconstruction, patients with a graft diameter of 8.0 mm or more demonstrated statistically better results than patients with a diameter of below 8.0 mm (p = 0.043). However, failure rates did not differ significantly with respect to other factors.

The diameter of hamstring tendon autograft may be different depending on height, weight, BMI and gender of the patient, as well as whether or not the patient is an athlete. Although we did not find statistically significant differences in failure rates after ACL reconstruction, this study demonstrated relatively better results in patients with a graft diameter of 8.0 mm or more. 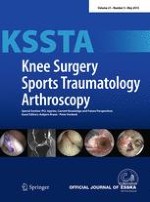 Augmentation or reconstruction of PCL? A quantitative review