The association of familial Mediterranean fever (FMF) with juvenile idiopathic arthritis (JIA) or ankylosing spondylitis (AS), most commonly with negative HLA-B27 antigen, was described in several previous reports, although the pathogenic mechanism of this association still remains unknown. Herein we report an uncommon association of FMF with HLA-B27 positive AS as an occasional coincidence in a patient who had been diagnosed as having JIA 23 years previously. 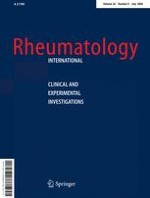 Pseudocalcification in a patient with inflammatory arthritis