The results of “Fast-track” colonic surgery in an unselected population outside of specialised units has been unknown yet.

Data from 24 German hospitals performing “Fast-track” rehabilitation as the standard peri-operative care for patients undergoing elective colonic resection were collected in a prospective multi-centre study conducted between April 2005 and September 2006 to evaluate local and general morbidity.

One thousand and forty-seven patients undergoing elective “fast-track” colonic resection were included. Compliance to essential parts of “fast-track” rehabilitation was high (epidural analgesia 86,6%, early oral feeding and mobilisation on the day of surgery 85.5 and 85.4%). Surgical morbidity was observed in 148 patients (14.1%) and general morbidity in 95 patients (9.1%), while mortality was 0.8%. Predefined discharge criteria were met within 5 (1–83) days after surgery, but because of economical restraints in the German DRG system, patients were discharged only after 8 (3–83) days. Re-admission rate was 3.9%.

“Fast-track” rehabilitation for elective colonic resection was safe and feasible in German hospitals of all sizes and yielded a low general morbidity and re-admission rate. Post-operative recovery was enhanced, but discharge from hospital was delayed because of economical reasons. 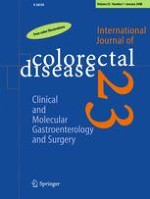 Ileus due colon endometriosis and the role of MRI scan

Apocrine carcinoma of the anogenital region. A case report including immunohistochemical and molecular study, discussion of differential diagnosis and a review of the literature

The effect of estrogen on hepatic microcirculation after ischemia/reperfusion