This study centres on the prevalence of new psychoactive substances (NPS) stimulant use, and its relevance as a cause of death amongst individuals between the ages of 12 and 35 in the greater Cologne area. An automated solid-phase extraction-liquid chromatography-tandem mass spectrometry method was developed for the determination of 97 stimulants in urine (including conventional stimulants, e.g. amphetamine and MDMA), of which 68 analytes were fully validated for quantification. Samples of urine or kidney tissue (in cases where urine was unavailable) of 268 deceased were collected, during autopsy, between January 2011 and May 2017 and analyzed. Blood (if available) was also investigated in cases where urine/kidney samples were tested positive for NPS. An intake of stimulants (including NPS stimulants) was proven in 50 cases. In 33 cases, only conventional stimulants were detected. A total of 17 cases were tested positive for NPS. Of the 17 NPS-positive cases, 13 were also tested positive for other conventional drugs of abuse (mostly amphetamine and MDMA). In six NPS-positive cases, at least three different NPS were proven to be ingested. Due to the determined blood concentrations, NPS was assigned as the leading cause of death, or of toxicological relevance, in the cause of death in only 5 cases. In two of the cases, NPS was judged to be a component of a multidrug poisoning, but of minor relevance. 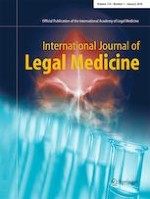 Pathological changes induced by phosphine poisoning: a study on 8 children

Automatic rib unfolding in postmortem computed tomography: diagnostic evaluation of the OpenRib software compared with the autopsy in the detection of rib fractures

Detection of blood and DNA traces after thermal exposure