The purpose of the present study was to characterize hypothesized relationships among fatigability and cardiorespiratory fitness in individuals with chronic motor-incomplete SCI (iSCI) during treadmill walking. The theoretical framework was that exacerbated fatigability would occur concomitantly with diminished cardiorespiratory fitness in people with iSCI.

Subjects with iSCI (n = 8) and an able-bodied reference group (REF) (n = 8) completed a 6-min walking bout followed by a walking bout of 30-min or until volitional exhaustion, both at a self-selected walking speed. Fatigability was assessed using both perceived fatigability and performance fatigability measures. Pulmonary oxygen uptake kinetics (VO2 on-kinetics) was measured breath-by-breath and changes in deoxygenated hemoglobin/myoglobin concentration (∆[HHb]) of the lateral gastrocnemius was measured by near-infrared spectroscopy. Adjustment of VO2 and ∆[HHb] on-kinetics were modeled using a mono-exponential equation.

The results of the present study may suggest that compromised O2 delivery and/or utilization may have contributed to the severity of fatigability in these individuals with iSCI. The understanding of the extent to which fatigability and VO2 and Δ[HHb] on-kinetics impacts locomotion after iSCI will assist in the future development of targeted interventions to enhance function. 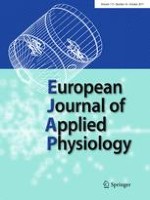