Feasibility of multi-parametric PET and MRI for prediction of tumour recurrence in patients with glioblastoma | springermedizin.de Skip to main content
TOOLBAR 1 2 3 4
SUCHE MENÜ 1 2 3 4

Recurrence in glioblastoma patients often occur close to the original tumour and indicates that the current treatment is inadequate for local tumour control. In this study, we explored the feasibility of using multi-modality imaging at the time of radiotherapy planning. Specifically, we aimed to identify parameters from pre-treatment PET and MRI with potential to predict tumour recurrence.

Sixteen patients were prospectively recruited and treated according to established guidelines. Multi-parametric imaging with 18F-FET PET/CT and 18F-FDG PET/MR including diffusion and dynamic contrast enhanced perfusion MRI were performed before radiotherapy. Correlations between imaging parameters were calculated. Imaging was related to the voxel-wise outcome at the time of tumour recurrence. Within the radiotherapy target, median differences of imaging parameters in recurring and non-recurring voxels were calculated for contrast-enhancing lesion (CEL), non-enhancing lesion (NEL), and normal appearing grey and white matter. Logistic regression models were created to predict the patient-specific probability of recurrence. The most important parameters were identified using standardized model coefficients.

Significant median differences between recurring and non-recurring voxels were observed for FDG, FET, fractional anisotropy, mean diffusivity, mean transit time, extra-vascular, extra-cellular blood volume and permeability derived from scans prior to chemo-radiotherapy. Tissue-specific patterns of voxel-wise correlations were observed. The most pronounced correlations were observed for 18F-FDG- and 18F-FET-uptake in CEL and NEL. Voxel-wise modelling of recurrence probability resulted in area under the receiver operating characteristic curve of 0.77 from scans prior to therapy. Overall, FET proved to be the most important parameter for recurrence prediction.

Multi-parametric imaging before radiotherapy is feasible and significant differences in imaging parameters between recurring and non-recurring voxels were observed. Combining parameters in a logistic regression model enabled patient-specific maps of recurrence probability, where 18F-FET proved to be most important. This strategy could enable risk-adapted radiotherapy planning. 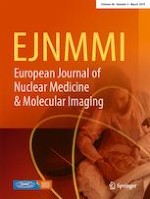