Patients with complete macroscopic resection of intrahepatic/extrahepatic bile duct, gall bladder, or ampullary cancer were eligible. S-1 was administered orally twice daily for 4 weeks every 6 weeks, up to 4 cycles. The treatment was continued up to 24 weeks or until recurrence/appearance of unacceptable toxicity. The primary endpoint was the treatment completion rate, which was defined as the percentage of patients who received a relative dose intensity of ≥ 75%. This trial was registered as UMIN000004051. 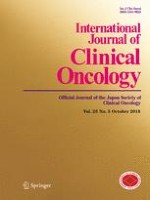 Plasma concentrations of dasatinib have a clinical impact on the frequency of dasatinib dose reduction and interruption in chronic myeloid leukemia: an analysis of the DARIA 01 study