Femoral osteotomies for the treatment of avascular necrosis of the femoral head | springermedizin.de Skip to main content
TOOLBAR 1 2 3 4
SUCHE MENÜ 1 2 3 4

Unloading of the area of necrosis out of the weight-bearing region by shifting healthy bone in the main weight-bearing area, which may delay the progression of the necrosis and enable healing.

By performing a surgical hip dislocation, full access to the hip joint is gained. A femoral varus osteotomy is used to turn the necrotic lesion of the femoral head out of the central weight-bearing area and more medially. Osteosynthesis is performed with an angular stable screw or a blade plate. Via a trapdoor procedure, direct debridement and autologous bone grafting from the trochanter major is possible. The cartilage flap is preserved whenever possible or supplanted by an autologous matrix-induced chondrogenesis (AMIC).

A passive motion device is installed during hospital stay beginning immediately after surgery to prevent capsular adhesions. After surgery, patients are mobilized with partial weight-bearing of 15 kg with the use of crutches for at least 8 weeks. Forced abduction and adduction as well as flexion of more than 90° are restricted to protect the trochanteric osteotomy. After radiographic confirmation of healing at the 8‑week follow-up, stepwise return to full weight-bearing is allowed and abductor training is initiated.

Nine patients (10 hips) with osteonecrosis of the femoral head were treated with surgical hip dislocation and varus osteotomy. Six hips were treated with autologous bone grafting, four hips with antegrade drilling. Chondral lesions were sutured in four cases, whereas two cases needed an AMIC treatment. The mean age at operation was 29 ± 9 years (20–49), and the mean follow-up time for all patients was 3 ± 2 years (1–7). Conversion to a total hip prosthesis was required for one hip with progressing arthrosis. The other nine hips showed no progression of necrosis and an improved clinical outcome. Complications were pseudarthrosis of the femoral osteotomy and pseudarthrosis of the greater trochanter. 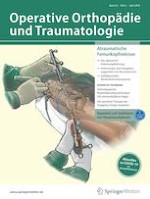